Besos a JENNY and MARY! Thank you for following. MmWah.


It's All About Me (Otherwise, What's the Point?) 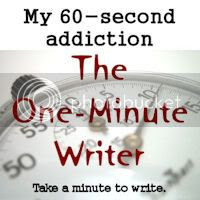 Better Blogs than I am

Weddings I Would Pay to Attend

Here's an excerpt from the "Celebrations" page in Sunday's edition of the Green Acres News & Astonisher. The accompanying photo was unfortunately an engagement portrait, not from the wedding itself, so no need for the link.

"The Bride wore a two-piece string bikini
that was white with yellow and red flowers,
and a white peasant skirt with crochet trim."

It really is just too easy, but I can't help myself.

1. In her defense, it was a TWO piece.
2. Vera Wang?
3. I wore 13 yards (approx. 30 pounds) of satin bouffant skirt, in May, in 98degree/ 99% humidity Carolina spring sunshine. She is waaaay smarter than me.
4. It's a toss-up whether my MIL would have shot me or herself. Maybe she would have shot The Him as well, for good measure.
5. I am experiencing morbid curiosity about the groom's attire. It's high time that was included in these announcements.
6. Give me a minute.

Okay. Let's continue.
7. Tuxedo Speedo?
8. I'm going to trademark that.
9. I am experiencing morbid curiosity about the minister's attire.
10. And that of the wedding party. Were the bridesmaids swimsuits really awful? Was gold lame involved? I want the group photo.

More fun facts, in the "of course" category:
The bride has a bachelor's degree in psychology and is studying for her master's.
She and the groom are co-owners of a tattoo studio. [Judging by her ink, I'm guessing he's the artist.]
The photographer's name is Buffy.
The reception was held at a restaurant called Bovine's.
*******

I leave you with an image of Queen Victoria in her wedding bikini.

Are you checking out my ass? You are. If not, I'll have you executed.

Microexpression: YEEEEHHAAAWW!
Two hours after that last pityfest I posted, they called. I got the job.
Dear God: it's a really bad precedent to reward that kind of whining. I'm sure my mother has mentioned this. But thank you, thank you, thank you.
Posted by jennygirltherat at 8:11 AM 3 comments:

That's what you're wearing?
Seriously? We need to talk.


Friday was a bad day. I entered the nadir zone of the 'flu on the same day that I was supposed to hear the verdict on a job I interviewed for in December that I really, really want. I recommend avoiding this conjunction of events if it ever comes up on your radar. Bad, bad juju.
I say "supposed to hear" because I didn't. Interviewing is like dating, isn't it? The nervous sweat; the inner monologue about body language, manners, grammar, coordination (I am prone to dropping things, knocking things over, or tripping. Never accept coffee or spaghetti sauce. Avoid stairs); the flashes of paranoia about hygiene issues. So you wait by the phone, willing it to ring, and it does, and it's your dentist reminding you of your appointment next week.
At one point my husband said, "honey...they're just not that into you."
Add fever, muscle aches, coughing, watery eyes, sniffling-sneezing-so-you-can't rest etc, and Friday was a Pity ParTAY. I demanded lavish and audible pity from everyone within reach. I may have called some friends just to insist they pity me. By 5 p.m. I was about as much fun as a wounded feral pit bull. I could hear my husband and daughter quietly conferring on a strategy to lure me into the back yard and trap me in the crawl space to await the Animal Control truck.
I know it's not just crazy people who endure the litany of despair and self-loathing prompted by the interview process, but being a pity junkie I insist that it's worse for Us (me). We (I) am special, and need more understanding and reassurance than others, DESERVE more, it's my RIGHT to expect it and your responsibility to provide it...
Aren't you glad you don't live with me? That I can only torture you in print?
Sunday night the fever finally broke. I realized this after the fact when I noticed I was wearing several layers including fleece pjs and had cranked my electric blanket up to 10 because I couldn't get warm with 2 regular blankets even though the ambient temperature was above 60. So, Monday dawned bright with promise. Freed from bodily misery I had nothing to distract me from wracking my nerves about the job. And I had a little epiphany about the upside of mental illness:

Since my perceptions about myself, other people, and the world in general are so unreliable, when I think it all sucks, chances are I'm wrong.

[Possibly contributing to the bleak mood was my involvement in a local production of The Diary of Anne Frank. Which may have been a bad decision given my vivid imagination, compulsion for historical research, proclivity toward nightmares and sleep disorders, and the fact that I have a 13 year old daughter. Dope slap me upside the head.]
[Furthering Friday's self-loathing was the moment about 11 p.m. when I realized it was Athena's birthday and I had not called or nothin.]
Posted by jennygirltherat at 6:40 AM 1 comment:

They're Coming For Me...

This morning, I woke to the alarm, turned it off, turned on my bedside lamp, and was greeted by this sight.
[It's deliberately blurry. My vision uncorrected is 20/600] 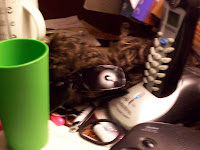 
With my glasses on, the image resolved to this... 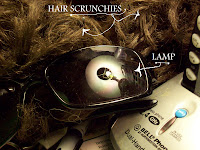 Posted by jennygirltherat at 6:56 AM 2 comments: